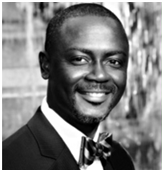 Axel M. Addy is best known for his remarkable accomplishment as the Minister of Commerce and Industry of Liberia and Chief Negotiator of Liberia’s historic accession to the World Trade Organization (WTO) concluding several bilateral and multilateral trade negotiations. The Liberia’s Accession is recognized as one of the fastest accessions for an LDC in the history of the WTO.

Due to this remarkable achievements and his achievements developing innovative national programs to empower SMEs for inclusive growth, he was recognized by Africa’s first female president, former President of Liberia and Nobel Laureate, Mrs. Ellen Johnson Sirleaf, who bestowed on him one of the highest national honors of distinction in January 2018, when she inducted him as a Grand Commander, Order of the Star of Africa, Grand Order of the Most Venerable Order of the Knighthood of the Pioneers of the Republic of Liberia.

As a strong advocate for the multilateral trading system, in 2017, in Buenos Aires, at the WTO’s MC11, he successfully rallied members’ sponsorship of the Declaration on Investment Facilitation and ITC led Declaration on Women and Trade. He also co-sponsored the Declaration on the g7 Plus WTO Accession Group to support and promote currently acceding governments including supporting the development of the WTO Trade for Peace Program, advocating for trade for peace in fragile and conflict-affected states (FCS). He currently serves as the host of the WTO’s first podcast, Trade for Peace, showcasing the work of policymakers and entrepreneurs operating on the frontline of the trade and peace nexus in FCS.

He is the Founder/CEO of Ecocap Investment Group (EIG) where he provides advisory services for acceding governments, companies exploring investment opportunities in Africa and multilateral institutions supporting trade for development and peace initiatives. He also serves as mentor for young entrepreneurs innovating solutions in response to the SDGs. He has co-authored several articles and a chapter in a book, “WTO, Trade Multilateralism in the 21st Century.”

He holds an MBA from Oxford University, an MA in African Studies from UCLA and a BA in Political Science from California State University, Long Beach (CSULB).