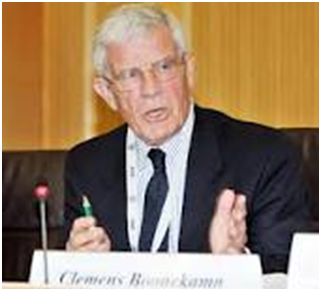 Clemens Boonekamp is now a consultant on trade policy and related matters.

Clemens Boonekamp is now a consultant on trade policy and related matters.

Formerly he was Director of the Agriculture Division of the WTO from 2009 to 2012. He was Secretary to the Agriculture negotiations in the DDA; representative to the G20 on agriculture; responsible for the secretariat for the WTO’s Committee on Agriculture, on SPS and on the STDF.

From 1991 to 1998, he was Counsellor, Trade Policies Review and External Relations; drafted and supervised Trade Policy reports; negotiated the WTO Agreements with the IMF and World Bank Before joining WTO, Mr Boonekamp was at the International Monetary Fund, Washington D.C. USA. He Participated in Article IV consultations and in programme negotiations, especially on balance of payments ( including financing gaps and external debt) and trade issues; represented the IMF at the GATT (now the WTO); and wrote a number papers for the IMF Board and publications, including on the Uruguay Round, Industrial Policies, and VERs. He was also teacher and researcher at University of British Columbia, Vancouver, Canada.