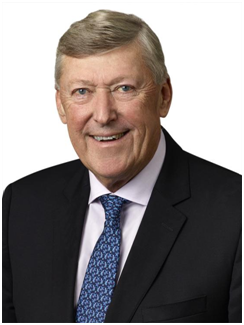 John Weekes is an international trade policy adviser, experienced in trade agreements, and the settlement of trade disputes. He has an insider’s perspective on how governments approach such matters, including the negotiation, implementation and management of trade agreements and trade relations. He as extensive experience in assisting businesses and governments to develop strategies to advance and protect their interests.

John Weekes is an international trade policy adviser, experienced in trade agreements, and the settlement of trade disputes. He has an insider’s perspective on how governments approach such matters, including the negotiation, implementation and management of trade agreements and trade relations. He as extensive experience in assisting businesses and governments to develop strategies to advance and protect their interests.

John retired at the end of 2021 from the Canadian law firm, Bennett Jones, after nearly 12 years as a senior business advisor. He remains active and continues with mainly pro bono activities in the field of international trade in which he serves:

John has participated regularly in conferences and TV interviews on the challenges facing the trading system and contributes articles to newspapers and magazines.

From 1971 until 1999 John worked in the Canadian government on the development of trade policy, participating in negotiations and working to ensure their successful implementation. During these years he assisted ministers in successive governments advising on the formulation of the government’s approach to managing trade relations and on the negotiation of trade agreements. In Ottawa he served in jobs ranging from desk officer to chief negotiator for the North American Free Trade Agreement (NAFTA), and senior assistant deputy minister, and abroad from first secretary, to ambassador to GATT, and subsequently ambassador to the World Trade Organization (WTO).

John regularly advised Canadian ministers at international meetings. He also represented Canada in trade negotiations and at various international trade meetings. He was Canada’s ambassador to the WTO from 1995 to 1999 and chair of the WTO General Council in 1998. From 1991 to 1994 he served as Canada’s chief negotiator for NAFTA, including for the side agreements on environmental and labour co-operation. He was ambassador to GATT during the Uruguay Round of multilateral trade negotiations and served as chair of the GATT Council in 1989 and chair of the Contracting Parties to GATT in 1990. He also served as chair of the GATT Articles Negotiating Group. In the 1970s, he participated in the Tokyo Round of GATT negotiations as a member of the Canadian delegation in Geneva.

As Canada’s NAFTA chief negotiator, he played a key role in managing the negotiating process inside the Canadian government including in determining the best way to structure Canada’s negotiating effort and the composition and organization of the negotiating team. After the implementation of NAFTA and the creation of the WTO he played a lead role in advising on how to restructure the trade policy functions inside Canada’s then Department of Foreign Affairs and International Trade to take account of the changed landscape of trade agreements and ensure that Canada derived full benefit from these new agreements.

John chaired the Working Party on the Accession of Saudi Arabia to the WTO during the critical formative part of the accession negotiations from 1996 until 2002.

In 1999 John accepted an offer from APCO Worldwide, a Washington-based international public affairs and communications consultancy, to become the chair of APCO’s Global Trade Practice and to open its Geneva office.

In 2003 he joined the American law firm Sidley Austin as a senior international trade policy adviser based in the firm’s Geneva office. In both these positions he provided advice to many clients including large American companies on how to advance their interests in the WTO’s Doha Round negotiations. He also advised clients on the protection of intellectual property rights before various international organizations in Geneva.

From 2008 until 2015 John was a director of the Alberta Livestock and Meat Agency and for several years chaired the Board’s Market Access Committee.