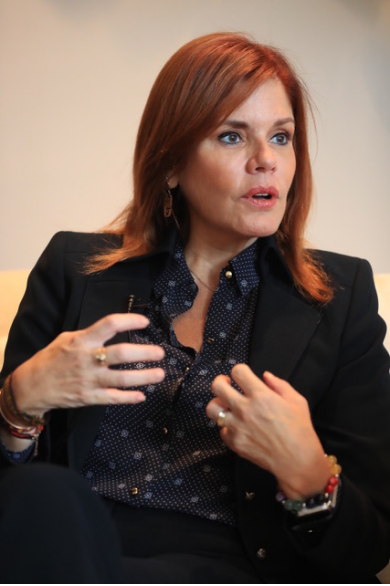 Professor of International Economics and Public Policy at Universidad del Pacifico, Lima, Peru. Currently she is also a member of the Executive Board of the Global Crop Trust.

Professor of International Economics and Public Policy at Universidad del Pacifico, Lima, Peru. Currently, member of the Executive Board of the Global Crop Trust, and Commissioner of the Broad Band Commission for Sustainable Development (ITU-UNESCO). Also, she is cochairing the Academic Consulting Committee of United Nation Forum on Sustainability Stands (UNFSS).

She has been Vice-President and member of the Parliament and Prime Minister of Peru. Another previous government positions she had held in her home country are Minister of Finance, Minister of Production and Minister of Trade and Tourism, Executive Director of the Competitiveness Council and Member of the Antidumping and Countervailing Duties Committee at INDECOPI. She has been Representative of the Interamerican Development Bank in Mexico.

She participated as part of the leadership team of UN Food Systems Summit (UNFSS), Action Track 4: Advance Equitable Livelihoods, and before, she was member of the UN Leading Group of Scaling Up Nutrition (SUN) and had led the Global Initiative Food Forever.

She is an economist graduated from Universidad del Pacifico and has a master’s degree and doctoral studies from University of Miami, she has a long career in the Academia as professor and researcher in areas like international trade policy and negotiations and development and competitiveness public policy. She is professor of Economics at the School of Public Management of Universidad del Pacifico, where she teaches at the graduate and undergraduate level, and did it, at the Diplomatic Academy of Peru.